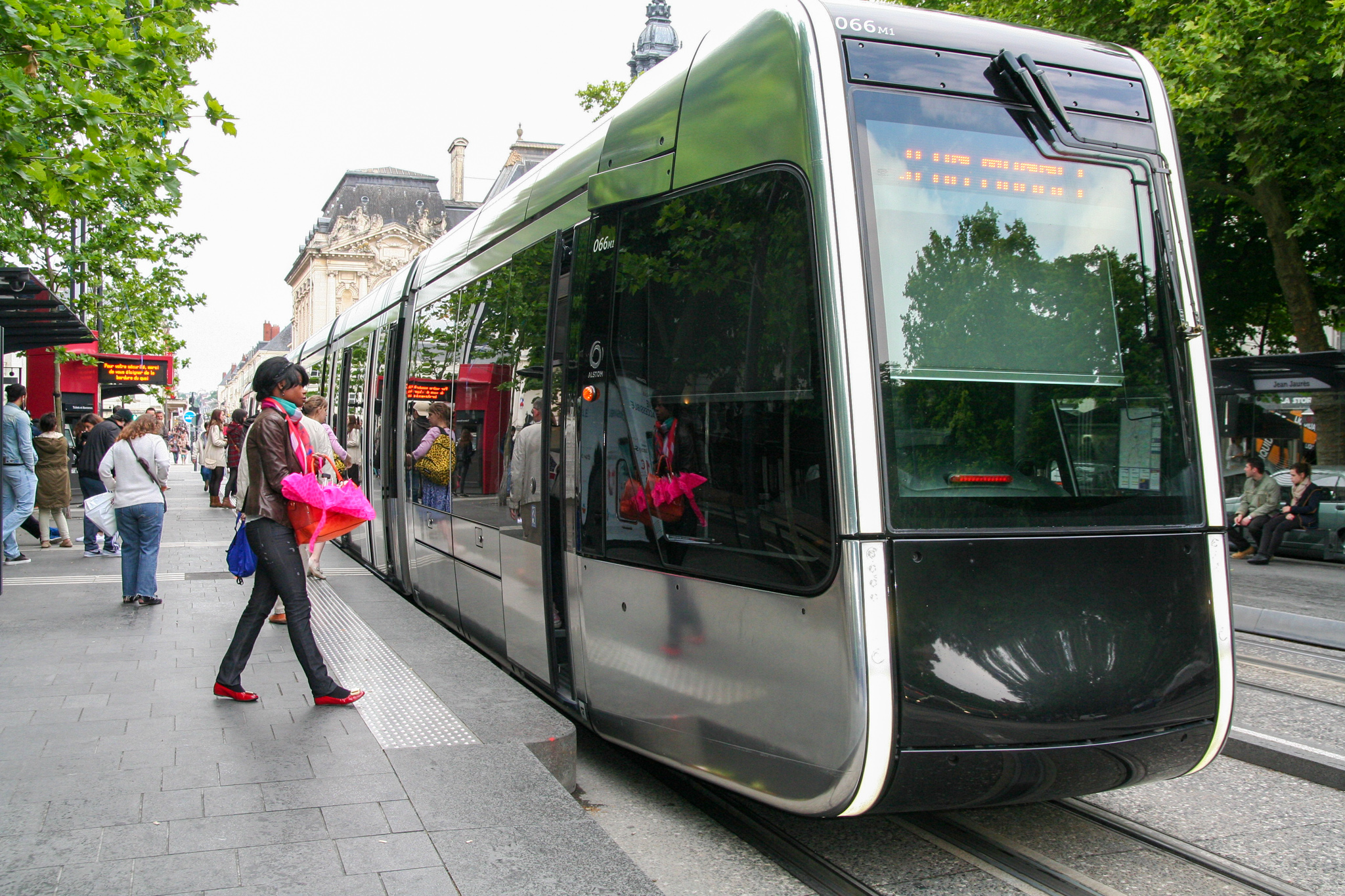 The new tramway in French Tours was inaugurated in 2013. The line is well integrated in the cityscape, and a great deal of attention was paid to the design of the rolling stock, stops and the city environment along the tramway. The municipality and the operator also put a lot of effort in communicating with the citizens before and during the project's implementation.

- Here, where the police station is now, we created an information center when the tramway project was started. It is important to have a central space everyone could find, says Anne-Sophie Laure, head of communication at Keolis in Tours, and points to a building near the station.

She meets us as the tramway stop just outside the grand old train station in Tour. We enter the mirror finished futuristic tram and travel through the city center to the depot where the operation center is located and where the rolling stock is maintained.

- The streets where the tramways was being built where basically just a big hole. Of course many people complained, she says.

The tramway project appointed ambassadors in every district, usually social workers which were already employed in the municipality to inform the citizens about what was happening. Every day the ambassadors were outside, wearing special vests and could address immediate issues and questions. A lot of information was also published in the local newspapers, and every day there was a special program on the local radio called "The Tramway minute" where information was shared.

The tramway passes by several old historical buildings along the cobble stoned newly pedestrianized streets towards the river Loire. The traffic was once very intensive along the streets and the public transport had to fight about the room with private cars. The street was closed to traffic a while before the construction started, so that people had time to get used to it.

- The new tramway line has exceeded expectations when it comes to the number of passengers. Already in 2015 we reached the targets we had set up for 2018.

At the end station it's clear that we have reached the end of the city. The last few hundred meters to the depot we walk on foot. The mirror finished trams are parked on parallel tracks outside of a large building of steel and glass.

- We have 21 trams in the system. Not all of them are used at the same time, some are usually serviced during the sand.

The garage doors on the depot are designed to be similar to the doors on the tram. Rectangular with rounded edges. In the evening the depot is lit with yellow lights and the glass in the building spread the warm glow into the surroundings.

- When the depot was finished we invited the public here. We had expected about 3000 visitors, but 15 000 showed up. It was a hectic day, Laure remembers.

We enter the operations center on the upper floor. In an airy room with large windows facing the track we are facing a huge screen with a grid of different images showing all station in realtime. Every stop on the system has HD-cameras. Next to the screen in a electronic sign mounted, similar to the one found at every tram stop. Messages from the operation's center can be sent to each stop in real time.

- Here we can see exactly where every tram is at any given time, Anne-Sophie says and points to yellow rectangular shapes on multi coloured lines along the bottom of the giant screen.
- It took us three months after the inauguration to get the tram service to run properly, but since then we haven't had any issues.

Alone, but not abandoned, on one of the desks is a red telephone of the old fashioned kind.

- If you lift the receiver you talk directly to the fire department, one of the colleagues in the room explains.

In the last row of tables is a woman with a headset, ready to answer any questions that come through to customer service. At every stop along the line there's communication equipment that will connect you with the operation's center for general questions. She will be the one answering.

Behind customer service is a long row of keys on the wall. They're for emergencies.

- If you turn the key you will turn of electricity for section of the tramway, Laure explains.

Down in the maintenance pit a tram is on its way in. In a corridor behind tall glass doors the trams are automatically washed. The room looks like a very long gas station car wash. Every tram is 42 meters and has to fit in there.

- If the tram has been vandalised with graffiti when it enters the depot, it's immediately cleaned. It's important for the system not to leave it. Every day the trams are also cleaned on the inside, says Anne-Sophie. We often have quality controls from the transportation authority in Tours that we have to pass.

To maintain the mirrored finished the tram are laminated on the outside. We walk by a pit with heavy machinery. This is where the wheels are machined to stay in perfect shape. Special attention is paid to make sure that the trams don't make any noise in the turns on the line.

Weird shapes in metal are locked in a cabinet in the workshop. They are decorative sculptures and part of the interior design concept of the trams. Students from an old vocational school in Tours were allowed to compete to have their artwork selected to decorate some of the handles in the trams. Every tram has their own distinct design of the little knobs.

Keolis is operating both the tramway and the buses in Tours. The company was also involved to a large degrees in the project, and redesigned many of the bus lines in the city. Four months before the tramway opened the changes were introduced to the public.

Aside from the tramway that's only one line, there's also a bus trunk line. The tramway is always shown on maps, stops, ticket machines etc in red, while everything that has to do with the bus trunk line is blue. The interior color scheme is the same on both buses and trams though.

- It was very intense for the drivers attending the course. They were bus drivers who were also trained to operate the tram. We also had a woman from marketing who wanted to learn how to drive too, Laure says.
- Now all of our drivers operate both the buses and trams. It's creates better group dynamics, compared to splitting us up depending on what we drive.